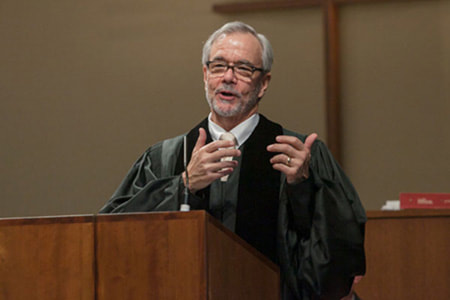 Curt has served as Senior Minister of Church of the Atonement for 24 years. He gratefully shares life with his wife, Diane. Together they have raised five children. They are blessed with three grandchildren. Curt and Diane share life with “Mr. Tibbs,” their Boston terrier.

​Curt came to faith in Christ as a student at the University of Illinois. He went on to graduate from Trinity Evangelical Divinity School in 1978, with an M. Div., summa cum laud. He served as Executive Director of the Christian Action Council for ten years. During that time he wrote, The Least of These, which earned a Gold Medallion Award for excellence in Christian publishing. In 1987, he was ordained to pastoral ministry in the PCA. He pastored a congregation in Seattle for over six years before accepting the call to Church of the Atonement in 1994. In 2011, Curt earned a doctor of ministry degree in adult learning theory from Covenant Theological Seminary.
Contact: [email protected]